From 2016 to 2017, methane emissions in the Permian Basin fell by approximately 100,000 metric tons of CO2 equivalent, continuing a downward trend that Texans for Natural Gas highlighted last year. The data were released this month by the U.S. Environmental Protection Agency, and include emissions from production, gathering, and boosting equipment in the Permian Basin, which covers parts of West Texas and Southeast New Mexico. 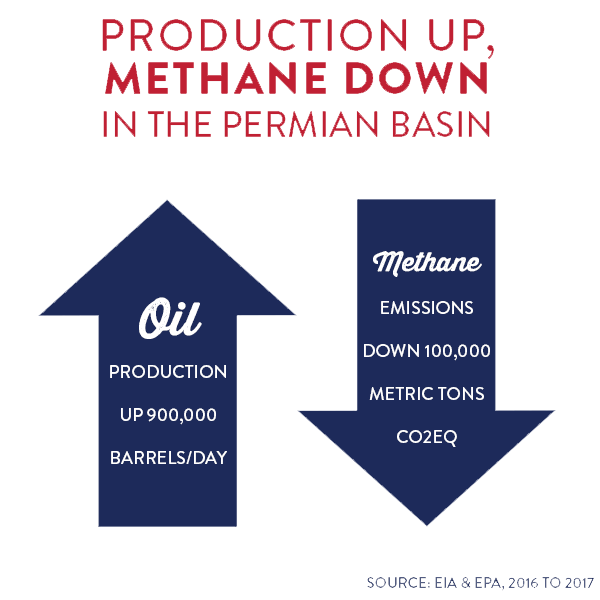 While methane emissions have declined, production in the region has soared. In January 2016, the Permian Basin was pumping out 1.9 million barrels of oil per day. By the end of 2017, that number had climbed to 2.8 million barrels per day. That’s an increase of nearly 50 percent. Natural gas production over the same period increased from 6.5 billion cubic feet per day (bcf/d) to 9.3 bcf/d.

Over the past year, critics of oil and natural gas development have targeted the Permian Basin, particularly with claims about methane emissions. Environmentalists have used misleading FLIR videos to try to defend Obama-era methane regulations that the Trump administration has been steadily rolling back. Earlier this week the EPA announced proposed revisions to some of those regulations.

Earlier this year, the United States became the world’s largest oil producer, thanks in large part to technological innovation in west Texas and southeast New Mexico. The latest data from EPA confirm that America’s rise to energy superpower status has not come at the expense of the environment.