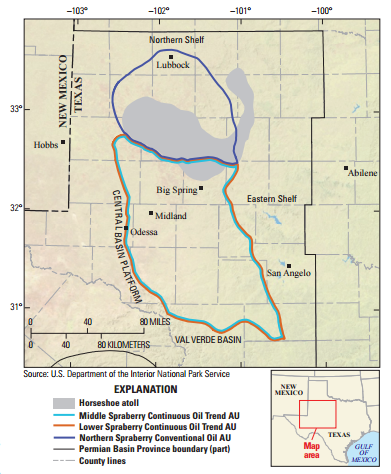 Source: U.S. Department of the Interior Park Service, via USGS

Historically, the Spraberry’s resources were primarily developed through conventional vertical drilling, which was the case when the 2007 assessment was made. But the increased use of technologies such as hydraulic fracturing and horizontal drilling since then has increased the amount of resources that are technically recoverable. As the assessment notes:

“The Spraberry was last assessed in 2007 based on historical production from vertical wells (Schenk and others, 2007). Since 2007, multiple intervals within the Spraberry have been targeted with horizontal drilling.”

As reported previously, technological advances in oil and gas development have increased the estimated resources in other West Texas formations as well. Just six months ago, the USGS released an updated assessment on the Wolfcamp Shale Formation – also located in the Midland Basin of West Texas – which found that the formation represents the “largest estimated of continuous oil” that the USGS has ever assessed in the United States. Now estimated to hold 20 billion barrels of oil and an amazing 16 Tcf of associated natural gas, USGS Energy Resource Program Coordinator Walter Guidroz credited technological advancement as a main driver of this increase:

“Changes in technology and industry practices have significant effects on what resources are technically recoverable, and that’s why we continue to perform resource assessments throughout the United States and around the world.”

This latest USGS assessment shows once again the critical role that technology plays in expanding domestic energy development, as advancements such as fracking and horizontal drilling have helped the United States maintain its role as a global energy superpower.