Found across Eastern Texas and along the Gulf Coast into Louisiana, the Eagle Ford is already one of the top producing oil regions in the United States. This report highlights the region’s unique geology, showing it is not only rich in oil resources, but natural gas as well. As USGS scientist and lead author for the assessment Kate Whidden notes in the press release:

“This assessment is a bit different than previous ones, because it ranks in the top five of assessments we’ve done of continuous resources for both oil and gas…Usually formation produce primarily oil or gas, but the Eagle Ford is rich in both.”

Rich indeed, as the USGS assessment finds that the Eagle Ford is second only to the Wolfcamp Midland Basin in West Texas for amount of continuous oil resources, as well as among the top five most abundant natural gas regions in the country. 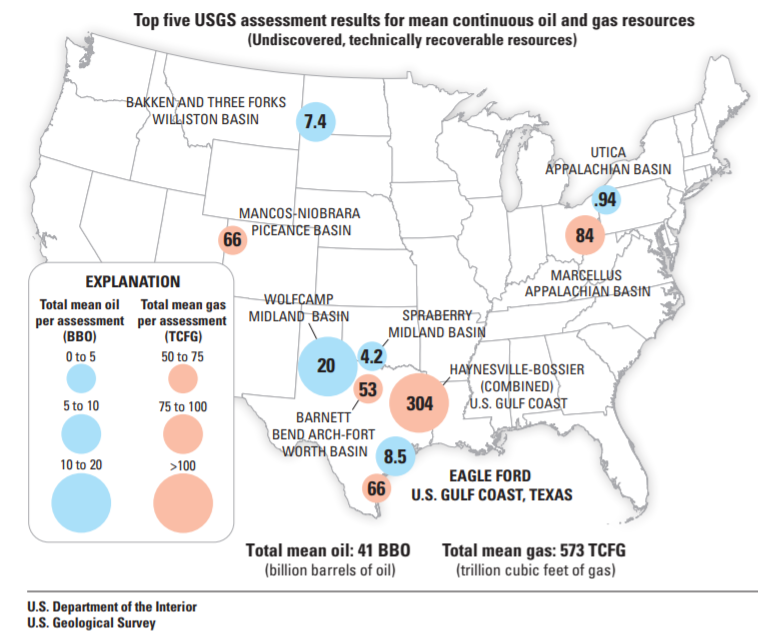 The Energy Information Administration (EIA) reported in April that Texas’ average annual oil production has increased more than any other state and the Gulf of Mexico combined. EIA also forecast earlier this year that the Permian will likely become the world’s largest oil play over the next decade.

“Texas continues to remain in the forefront of our Nation's energy supply chain with remarkable increases in production and reserves due to the revolutionary unconventional techniques used to release previously unrecoverable resources.”

And Texas’ incredible production is spurring major manufacturing investments in the Lone Star state, as a recent Texans for Natural Gas report demonstrated. Reilly may have said it best in USGS’ press release when he commented, “Texas is so well-known for its history of oil and gas production that it’s almost synonymous with petroleum.”