But this energy superpower status has also made Texas a target for environmental groups who oppose fossil fuels. Funded by large foundations committed to “Keep It In the Ground,” these groups – many of which are headquartered in California or Washington, DC – have long tried to curtail the Texas energy revolution. Thankfully, they have largely been unsuccessful: in the past six years, Texas oil production has more than doubled.

Which brings us to this week, as the Texas Tribune published an incredibly one-sided report about Texas oil exports and how they supposedly harm local communities in the state. To be clear, the Texas Tribune is not an environmental group – but the organization it partnered with, the Center for Public Integrity (CPI), might as well be. CPI is funded by a who’s who of foundations that bankroll the “Keep It In the Ground” movement, including the Park Foundation and even the Leonardo DiCaprio Foundation.

The Park Foundation, for example, funds Earthworks and the Environmental Integrity Project – two organizations quoted at length in the Tribune/CPI report with no mention of their shared funders.

Unsurprisingly, the subheading for the report claims Texas oil exports are “polluting the air, overwhelming communities and threatening the planet.”

As Texans for Natural Gas highlighted last month, however, the reality is much different: oil exports deliver enormous benefits to Texas communities. Here are just a few:

With those facts in mind, let’s now take a closer look at some of the bigger problems with the Tribune/CPI report.

Capitalism vs. the Community?

Tribune/CPI: Oil exports are “bringing big profits to oil companies as well as lung-searing pollution to places where drilling has skyrocketed, while threatening to exacerbate climate change.”

Throughout the Tribune/CPI report, the benefits are typically couched in terms of money flowing to oil companies, while communities are largely described as bearing the costs. This includes phrasing like a “bonanza for companies,” while the millions of dollars generated for local school districts are cast in the most negative of lights.

This is a common tactic among environmental groups, who prefer to attack “Big Oil” as an abstract concept. They have no interest in attacking the men and women who work for energy companies, much less the small businesses that service the energy industry and create enormous spinoff benefits in local communities across Texas.

Unfortunately, the Tribune/CPI report chose to follow the environmentalist line of argument.

“The company, which promised not to drill within the city limits or the state park, also donated money to a local school and bought the city a fire truck.

“‘They help us with everything,’ said Balmorhea Alderman Josue Mendoza. ‘Everyone’s kind of seeing the benefits of it.’

“Still, Apache is in the Permian to make money. It’s not waiting for the results of all the studies to exploit its new oil and gas play, known as Alpine High. It plans to drill 5,000 wells in the coming decades.” (emphasis added)

An energy company is doing right by the community, and there’s even a local official who testifies to that fact. Yet the Tribune/CPI team contrasts that with the company’s desire to “make money” – as if capitalism is somehow inconsistent with community benefits.

Curiously, this highlights a contradiction in the Tribune/CPI narrative. As the above example shows, the reporters are drawing a division between “making money” and community benefits. But earlier in the report, the Tribune/CPI team laments: “Climbing production hasn’t boosted local tax revenues fast enough to address all the increased needs that come with it, from crowded classrooms to wrecked roads.”

So which is it? Is generating revenue a bad thing, or does there need to be more revenue generation?

This kind of contradiction is telling, because it highlights how this report worked backwards from a conclusion. The reporters wanted to tell a story about how oil and gas development is “harming” Texas communities, even if it meant contradicting themselves while pursuing that goal.

Tribune/CPI: “Such investments are meant to last for decades. ‘Once you’ve sunk the costs, you’re really not going to just stop,’ said Richard York, an environmental studies and sociology professor at the University of Oregon. All this infrastructure makes it ‘very unlikely that we can dramatically curtail fossil fuel use,’ he said. It increases the odds that the Permian free-for-all isn’t a flash in the pan, a last gasp before nations get serious about their climate promises.”

As noted above, CPI is funded by a number of organizations that bankroll the anti-fossil fuel movement. So it’s not surprising that the Tribune/CPI report would lament that West Texas energy production is a hurdle for groups advocating for extreme measures like banning fracking and shutting down all oil and gas production.

The irony, however, is that meeting “climate promises” will hinge on the use of natural gas – not just in the United States, but all around the world. Contrary to the assertions in the Tribune/CPI report, Texas energy exports are going to play a key role in helping the world address climate change.

Thanks to natural gas, carbon dioxide emissions in the United States are at their lowest level in more than 30 years. Thanks to increasing exports of liquefied natural gas (LNG), these benefits are being shared with countries all over the world.

As the U.N. Intergovernmental Panel on Climate Change has observed, “Natural gas has the lowest carbon content of the fossil fuels, and it is generally assumed that its use will increase as the result of efforts to reduce CO2 emissions.” Even the International Renewable Energy Association acknowledges the important role that shale gas can play in creating a cleaner energy system around the world.

The Tribune/CPI report doesn’t solely focus on carbon dioxide, though: “methane — an even more potent greenhouse gas — leaks from wells, pipelines and other parts of the supply chain,” according to the report. This, too, is misleading.

Last year, Texans for Natural Gas highlighted how between 2011 and 2016, methane emissions in the Permian Basin declined by 300,000 metric tons of CO2 equivalent, based on data from the U.S. Environmental Protection Agency. Oil production increased by an amazing 1.1 million barrels per day over that same period. 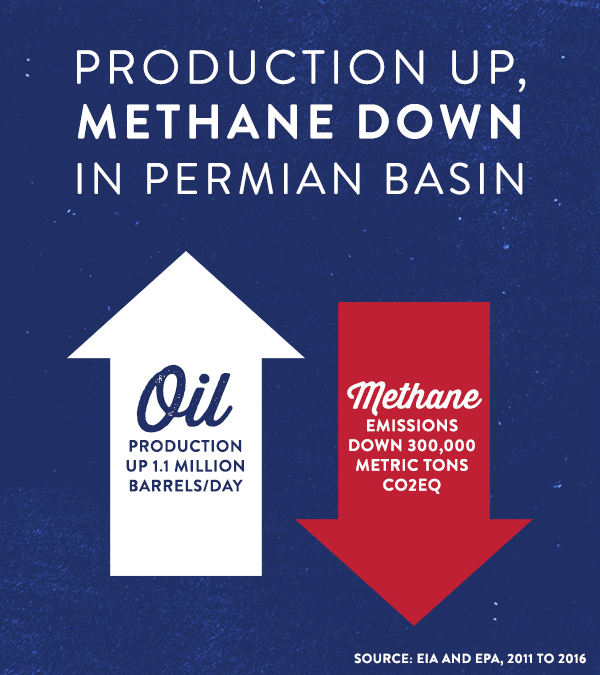 To be fair, the Tribune/CPI report was focused more on oil than natural gas. But when the reporters had the opportunity to explain the nuances of global energy systems – including how a fossil fuel produced in Texas is helping the world address climate change – they conveniently refused to do so.

Tribune/CPI: “Texas Gov. Greg Abbott and others say the drilling spree is ushering in a new era of American energy independence, but American demand isn’t driving it. Foreign demand is.”

Whether it’s energy exports or the Keystone XL pipeline, it’s hard not to see a subtle and consistent word play among critics of energy development: it’s being driven by “foreigners,” with the implication that there is less American benefit as a result.

We’ll let others opine on the raw political calculus behind this phrasing, but the bigger point is that the juxtaposition of global markets vs. American benefits is simply not true.

Last year, the United States became a net natural gas exporter for the first time in decades. Earlier this year, net oil imports hit their lowest level since 1958. This has delivered significant benefits in terms of reducing America’s trade deficit, and it has unquestionably made the United States more energy secure. We’re not only producing more of our own energy, but we’re also able to sell our products to other countries, which means more dollars coming back into the United States. 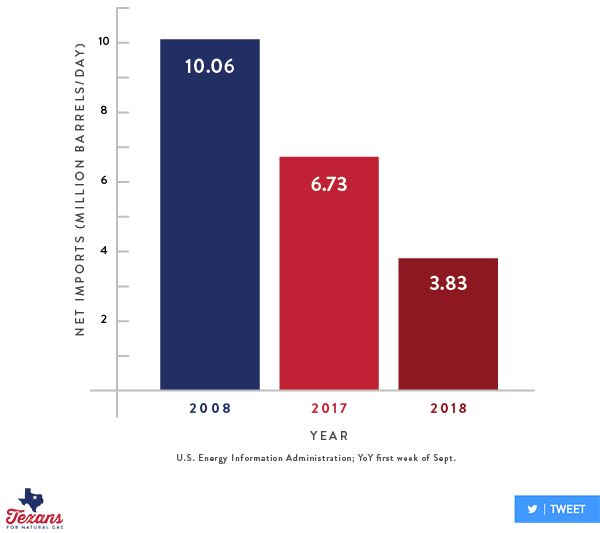 When farmers export wheat or other commodities, does that harm the United States? What about when auto manufacturers export vehicles? The answer, of course, is no. Allowing U.S. companies to participate in the global market means they ultimately have more resources to invest, which means more jobs and more revenue for communities. Three years ago, it was illegal to export crude oil from the United States. The fact that exports have grown significantly since Congress lifted that ban is proof that such a ban was a drag on the full potential of the U.S. economy.

It’s odd that lifting people out of poverty in Asia and giving them a cleaner option for producing electricity– which Texas energy exports are currently doing – is presented as such a catastrophe by the Tribune/CPI team.

Tribune/CPI report: “Neta Rhyne thinks that’s a complete misrepresentation. The Toyahvale resident, afraid the boom will irrevocably harm her community, has driven the 400 miles to Austin multiple times to complain at Railroad Commission hearings about the spread of wastewater-injection wells. She said she sees no evidence the agency will stop it. She’s angry at the regulators and the companies alike. ‘Why are they destroying our beautiful desert oasis to send oil to Asia?’ she said.”

The reporters also trot out the familiar accusation that the Railroad Commission of Texas isn’t doing enough to police the shale energy boom. The example cited here manages to imply that additional wastewater disposal infrastructure is harmful – “no evidence the agency will stop it” – while using a local activist’s anti-trade rhetoric as some sort of evidence. The reporters never consider that the complaints levied against the new wells may have failed because they lacked merit. Ms. Rhyne’s decision to drive 400 miles “multiple times to complain” is not necessarily a validator, contrary to the Tribune/CPI’s reports implication.

Indeed, Rhyne’s assertion about companies “destroying our beautiful desert oasis” is left unchallenged, even though there is zero evidence to suggest oil and gas development has caused any groundwater contamination in the area.

Moreover, the suggestion that the Railroad Commission is inadequately regulating or responding to the industry’s growth in Texas is not true.

In 2011, Texas passed a law requiring disclosure of chemicals used during fracking. In 2013, the Commission updated its well integrity standards, which one prominent environmental group called “the most significant overhaul of these practices in several decades.” In 2014, the Commission expanded its authority to revoke or modify injection well permits, based on concerns about seismicity. Dozens of permit applications since then have been rejected or modified.

The Tribune/CPI report used an argument-by-anecdote approach, but available data suggest the regulatory environment in Texas is working. A landmark report from Texas scientists last year confirmed there had been no confirmed cases of groundwater contamination from fracking in the state. Seismicity is down, and production is up for both oil and natural gas. Environmentalists often lament the lack of fines imposed for violations, and that argument was certainly prevalent in the Tribune/CPI report. But the Texas regulatory system prioritizes actually fixing problems when they occur, not just punishing companies.

By any objective measure, oil exports have been a net positive for Texas. The Tribune/CPI report attempts to challenge that fact with anecdotes and inaccurate assertions, which ultimately fall back on common activist claims that have been widely refuted.

Fears about groundwater contamination in Texas have been debunked multiple times, including in a peer-reviewed study published last month. Robust scientific findings have demonstrated the climate benefits of natural gas, but environmentalists – who ironically accuse others of being science deniers – continue to deny those findings. Activists have flooded state agencies with complaints about oil and gas development, particularly as it relates to air quality, forcing taxpayers to fund investigations of facilities where there are often no violations occurring.

Science has demonstrated that shale development is delivering cleaner energy, at home and abroad. Anti-trade narratives may offer the opportunity for interesting story lines, but basic economics – and the actual the experience in Texas – demonstrates how global trade is an economic winner.