We Answered Some of Your Most Frequently Asked Questions

You asked, we answered. Here’s what our supporters want to know about Texas’ most lucrative commodity: oil and gas. We’ll cover all the basics and some of the nitty gritty. Hopefully, you’ll walk away with the record set straight, and a lot more knowledge about energy.

What is LNG? How is it different than natural gas?

Liquefied Natural Gas (LNG) is natural gas that has been cooled to -260°F, changing its state from gaseous to liquid form. In liquid form, natural gas is much easier to transport and distribute to places where pipelines are not available because of its more compact form.

OPEC’s stated purpose is to coordinate petroleum policies between its member countries with the goal of stabilizing the oil market for consumers, producers, and investors. However, as noted by the Library of Congress, “The focus of OPEC is to control oil output in order to influence prices. As natural gas may be produced with oil, some view OPEC as also being an indirect natural gas cartel.”

Is the U.S. “energy independent”? If so, why do we need to import anything?

Today, the U.S. is a top global producer of oil and natural gas. Which leads to the question: if we produce so much, then why would we need energy from anywhere else? The answer is that even though the U.S. is a major net exporter of energy, there are still certain petroleum products we need to import due to infrastructure limitations. This is especially true for states on the East and West coast that rely on fuel imports.

Additionally, sometimes energy security and energy independence can be confused. The key differences between the two is that energy security is “the uninterrupted availability of energy sources at an affordable price” and energy independence is the abstract concept that a country can insulate itself from global energy markets. While no country can completely insulate itself from fluctuations within the energy market, having strong domestic production can help cushion some of the extreme volatility of the commodities market.

How do American energy reserves compare to OPEC reserves?

America’s Strategic Petroleum Reserve (SPR) reached its lowest level since the 1980s in October 2022, after over 100 million barrels were released. The SPR has been depleted to around 450 million barrels. Comparatively, OPEC reserves sit at 1.24 trillion barrels.

The stark difference in reserves stems from energy policy choices made by the current administration to lower energy prices by releasing large amounts of the reserve. Using the SPR to temporarily manipulate markets puts the country in a vulnerable position should an emergency like a severe weather event occur. At best, draining the SPR to tackle high energy prices may help mitigate some of the problem now, but only at the cost of pushing the real issue down the road.

Energy policies that get to the root of the problem and address the United States’ supply of oil and gas resources are what America really needs. This includes tackling production variables, such as streamlining permitting processes for additional infrastructure or increasing on- and offshore development opportunities. Increasing domestic oil and gas production in the United States will provides a solution on a variety of fronts including strengthening national energy security, lowering prices at home, and allowing us to export LNG to our allies and trade partners in Europe.

Why don’t we just keep all the oil and gas we produce to ourselves? Why export it?

Exports of our abundant natural gas benefit the economy. According to a 2017 study from the American Petroleum Institute, LNG exports will support anywhere from 220,000 to 452,000 American jobs, and add up to $73 billion to the U.S. economy by 2040.

American energy exports also can protect our allies and trade partners. Between the end of 2021 and 2022, Russia’s invasion of Ukraine drove a dramatic increase in global energy demand, as many nations began sanctioning the Russian energy imports that have previously played a large role in their energy mix. With Europe in a bind and looking elsewhere for reliable energy, Texas LNG has played a critical role in delivering energy security to our allies abroad. In the first of half of 2022, 74 percent of all U.S. exports went to Europe. In that same period in 2021, exports to Europe only represented 34 percent of U.S. LNG exports.

Are there any LNG facilities in Texas?

Yes, there are several along Texas’ Gulf Coast. In fact, the Gulf Coast is the U.S. LNG export capital. Not only did the first trans-ocean shipment of LNG originate in the Gulf, but it is home to four of the seven active U.S. LNG export facilities and all the new facilities currently under construction. And, just two LNG terminals in Texas represent nearly 37 percent of current U.S. export capacity.

Moreover, Texas is home to more than 85 percent of the additional planned U.S. LNG export capacity, which will be located in the Gulf of Mexico and supplied largely by Texas natural gas. As of 2021, there were three new LNG export terminals under construction with one expected to be operational by 2024. 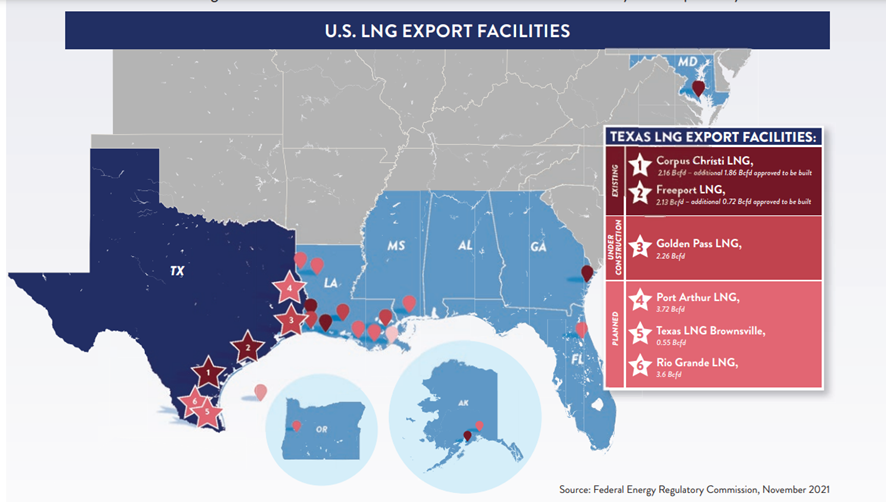 How do we export LNG?

We can export LNG via tankers, pipelines and even trucks.

When shipped across oceans and other long distances, LNG is transported in double-hulled ships with cryogenic tanks that keep the gas in its liquid form. Once at the terminals, LNG is returned to its gaseous state and transported by pipeline to distribution companies, industrial consumers, and power plants. From there, it is either stored or used by consumers.

For shorter distances, LNG suppliers are increasingly turning to trucks to transport LNG. This mode has a limited time window of 40 days to get to its destination before evaporating, which makes it convenient for transporting the commodity to places like Mexico.

What sort of oil and gas infrastructure is currently planned for Texas? The U.S.?

Texas has 483,571 miles of pipelines, many of which are natural gas pipelines that facilitate the distribution, transmission, and gathering of natural gas that are vital to Texas’ energy system and economy. These pipelines help to heat homes and businesses and power industries across the state.

There are several major pipeline projects underway in Texas. For example, the Matterhorn Express will transport up to 2.5 billion cubic feet of natural gas per day from the Permian Basin to the greater Houston area. This project would supply enough heat to around 2 million homes every day. Other pipeline projects which have been announced in Texas include the Agua Blanca Pipeline, Gulf Coast Express, and Oasis Pipeline, all of which will expand the Permian Basin’s takeaway capacity.

There are also a number of LNG export facilities underway to meet domestic and global energy demands. Currently, there are two approved-and-under-construction LNG export terminals in Sabine Pass, Texas and Corpus Christi, Texas.