Why is a ‘Local’ Texas Activist Group Raising Money for DC Environmentalists?

PCU confirms in the post that EIP “has now provided legal counsel” to “challenge the air permit” for Gulf Coast Growth Ventures, a joint venture between ExxonMobil and SABIC. “But, they need our help,” PCU says. EIP’s most recent filing with the Internal Revenue Service shows the group received more than $2.8 million in contributions and grants in 2016. 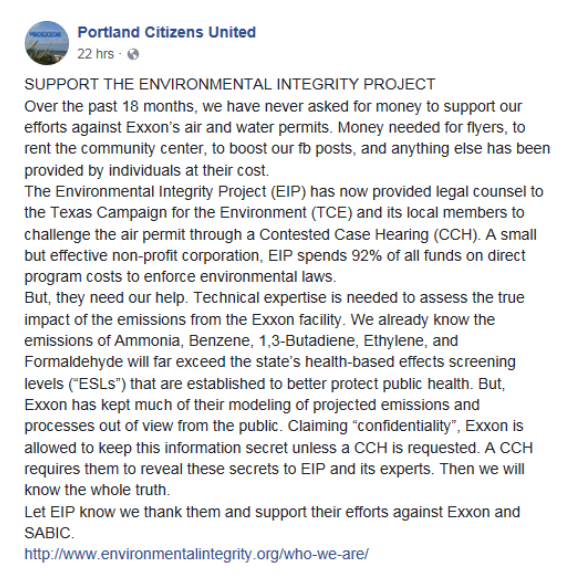 The fundraising plea comes less than two weeks after PCU penned a defensive blog to affirm that they are a “local” group. Earlier this year, PCU was exposed by Texans for Natural Gas for its misleading tactics and collaboration with out of state groups like EIP and the Sierra Club.

In a post titled We Are Texans Fighting For Something Special, PCU responded to research published by Texans for Natural Gas and others showing links between the group and extreme environmental groups like the Sierra Club and the Center for Biological Diversity, which is based in Arizona. “You may have seen editorials claiming that ‘special interests’ from California and Arizona are behind the opposition to the EXXON/SAUDI facility,” PCU wrote. The post concluded, “to be clear…we are local, we are Texans, and our interests ARE special…”

This isn’t the first time PCU has leaned on the DC-based EIP for help. Last year, PCU invited EIP and Sierra Club to an event in Portland to sow doubt about the safety and environmental impact of the proposed facility. Texans for Natural Gas debunked many of the claims.

The connection between PCU and the Sierra Club has also strengthened recently. In January of this year, the director of Sierra Club’s Environmental Law Program, Pat Gallagher, approved $250,000 for litigation against GCGV, according to the group’s meeting minutes. The group later clarified that money “might need to be spent in opposing the Exxon plant in Portland. This amount has not been authorized.” However, the Treasurer’s Report from the Sierra Club’s most recent meeting in May states that the group has a “large special fund for the legal suit against Exxon/Sabic [sic] that continues to grow daily.”

PCU also cosponsored a petition against the GCGV facility with the Sierra Club, which read in part, “We, the undersigned residents of the Coastal Bend, oppose this facility.” 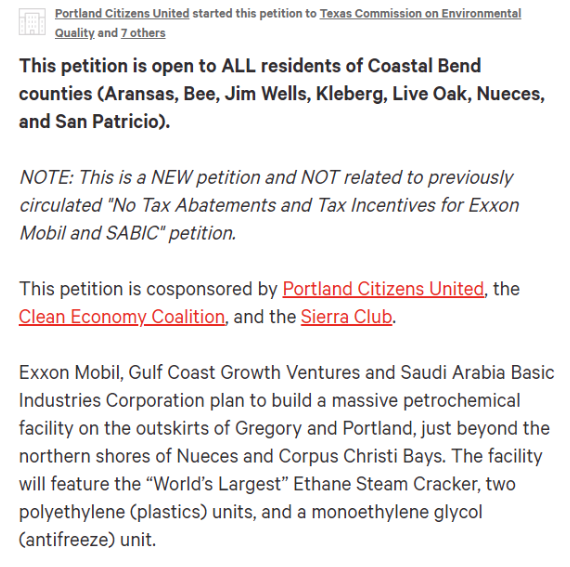 Of course, Sierra Club and EIP are not the only out-of-state activist groups assisting PCU.

In May, the Arizona-based Center for Biological Diversity (CBD) filed more than 1,100 comments with the Texas Commission on Environmental Quality (TCEQ) in opposition to the GCGV project. In a press release about their efforts, the group declared that “over 1,148 Texas residents” supported the petition against GCGV.

However, a review by Texans for Natural Gas showed that hundreds of those comments came from outside Texas, with a number of out-of-state commenters submitting multiple times.

Meeting minutes published by the Sierra Club show that in December 2017, “Jason from Portland Citizens United” gave an update to the group on the GCGV facility. One month later, “Jason” directed the group to a “link to submit public comments regarding 2 air permits at www.PortlandCitizensUnited.com.” In the same meeting, according to the minutes, “Jason raised the question of how to best spend donations,” noting that the group needed a “brain trust type meeting on guerilla warfare against a company with very deep pockets.”

Although it’s unclear if the same “Jason” from PCU is being referenced at both meetings, the minutes confirm close collaboration between PCU and the Sierra Club. It’s also unclear if PCU specifically endorses “guerilla warfare” against the companies proposing to invest in the multi-billion-dollar facility, or if that language came from the Sierra Club. Either way, aligning with the Sierra Club speaks to an increasingly radical strategy on the part of PCU.

While PCU would like to claim those opposing the GCGV project are “local” and “Texans,” the increased reliance on out-of-state groups raises serious questions about how much of the opposition is driven by local concerns – and not a national political campaign against oil and gas.